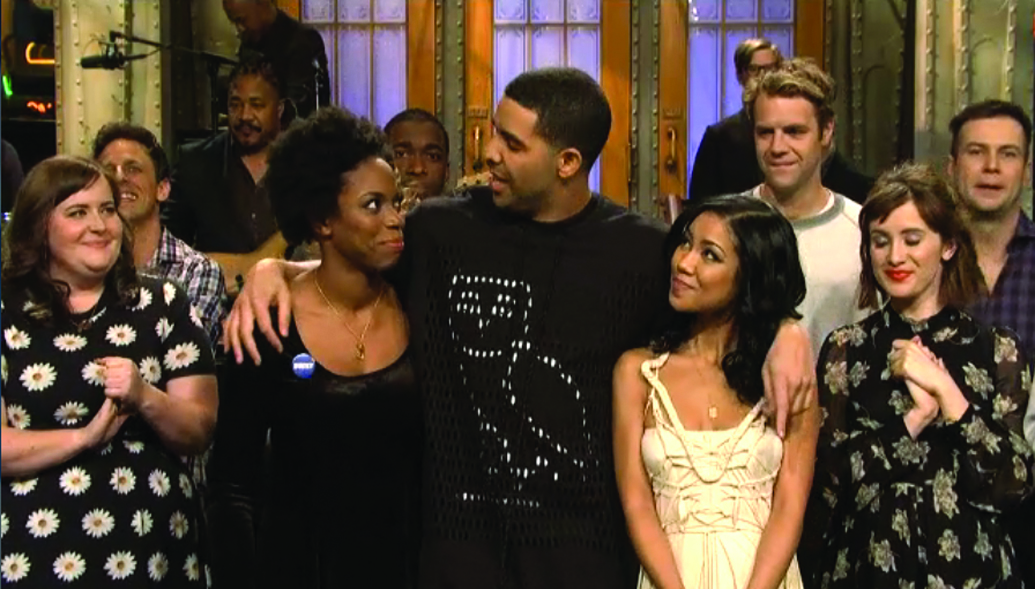 This week Saturday Night Live debuted their latest cast member, Shasheer Zamata. Her addition to the 39 year old comedy ensemble came after well-publicized and deserved criticism led to the show listening to the criticism and—surprise, surprise—finding the talent they thought was so elusive. Shasheer brings the total women of color on the show to 4 of 138 cast members over 39 years, or almost 3%, still well below the 18% that women of color make up in the general population.   Hype bubble busted.

Shasheer’s talent is undeniable, but let’s take a look at the actual episode.  First let us say that this talented young actress has earned her spot on the show, with a solid track record in comedy.  Shasheer appeared in several of the opening skits to satisfy the hungry eyeballs.  But making media diversity work is about two things—the number of people of different races and also the quality of the character that they portray.  While Shasheer did make it into 4 sketches with 5 characters—more than some of the other new cast member added in the fall–I’m not so sure we really got to see her stretch her wings.

In her debut episode, Shasheer played Keenan Thompson’s wife at a bar mitzvah, a dancing smoking Rhianna-as-Blossom, Two Chains’ younger sister, a backup singer, a girl hosting a slumber party and a student in detention.  Ground breaking?  Not yet.  So while SNL did incorporated more diversity into their line-up by adding a black female, the jury is still out to see if they will provide the opportunity for her to play characters that go beyond stereotypical roles.

Here’s the bigger story:   stealing the diversity card for the show was the guest host Drake.  Of course he appeared in more sketches, but what made the night his was the diversity of roles he played.  Drake himself has a background that breaks stereotypes: rapper but not gangster, Canadian, multiracial and, as he told us, polite.  Because we know him to be all these things, SNL played with the kinds of characters he portrayed with barely a nod to playing a chain-wearing gang banger.

It seems like SNL was able to write interesting roles for Drake that asked us to question racial boundaries as we laughed.  The range of charters he played brought a sparkle of diversity into an otherwise typically stereotypical episode.  Now if they can just learn to keep those roles coming for their regular cast members, they may be on to something.

Earlier this summer, Cheerios released a commercial touting the heart healthy benefits of its cereal.  The ad featured a little girl, a mom and a dad.  No problem.  The family was an interracial family, which you’d know if you just watched it.

Cute, right?  Well what was not so cute was the response to the ad. On YouTube, hundreds of people ranted that the ad heralded the apocalypse and coming race war and all the rest, all because of the depiction of what is for millions of Americans is simply what we call family.
First to the ad.  The first step in figuring out if a piece of media is racist is to see if race is a significant part of the ad.  Does the story tell us something about race?  In the Cheerios ad, we see a white mommy, a black daddy and a mixed race child, so we do see people of various races represented together.  But does it tell us something about race?
Lots of people thought it did from haters who thought it an abomination to the many more who were happy to see a family like their represented.  But first let’s look just at the story with a simple technique: some might call it the commutation test, but were going to keep things simple and call it sign switching.
Just like this web page is a bunch of coded symbols that the computer makes meaning of, media messages are strings of codes and signs that we, the human computer makes sense of. in the Cheerios ad we have three actors playing roles we can identify– without Cheerios saying outright– as a family.  How?  The setting is in the home, the child refers to the woman’s character as mom, the male is lying on a couch sleeping, presumably not a home invasion.  See, codes that you interpreted as an indication that this is a family at home.
Race often acts as a code, sending us sign to help us fill in the story.  For instance, if I show you images of characters of different races, will it help you to fill in the story?  Lets see…

One of these guys is really good at basketball and one is really good at martial arts.  Codes       that we are familiar with make it seem natural that blacks are better at ball and asians are all good at martial arts.
Stereotypes use these codes to reproduce the same old stories about race that are shaped by long history and social influences.  If we are looking to see if a code is communicating about race we can try to imagine how we would read the story of the races were switched.  Ever see trading places?  ( clip) here we see a movie about what it would be like.
Back to our Cheerios ad.  Lets switch the actors around and see if the story changes.  If we had three white actors, or three black actors the story of a family scene at home remains the same, and the basic meaning of the ad is not different.  What Cheerios has achieved is quite rare– and ad free of racial stereotypes.  There are no messages about how these characters will act that we can interpret solely from their race–inside the ad itself. But outside the ad in the real world is another story.
Our Cheerios ad isn’t hanging out at home.  The ad ran widely on television and on the web.  The ad ran in a world where people haven’t yet packed away their attachment to Jim Crow, where people are ignorant of the fact that interracial families are not only legal–as they have been since 196x, but are a growing part of US, with over xx people identifying as multiracial in the last census.  While the ad itself is free of stereotypes, the audience, unfortunately is not.
Any given audience will have multiple perspectives.  The reaction of audience members, especially this case, can tell us something about race.  The reaction to the Cheerios ad points out that while more members than not were happy to see our beloved post racial country represented in this lovely family tableaux, the racism that we’d like to leave behind isn’t gone from the rear view mirror yet.
So the Verdict on the Cheerios ad:  not racist.  And Cheerios, bonus points for showing us a family from our race-no-longer-matters-future. I hope we see you in that post racial utopian someday.
As for the brouhaha, the racism here lies not in the ads stars, but in the throwback trolls selves.