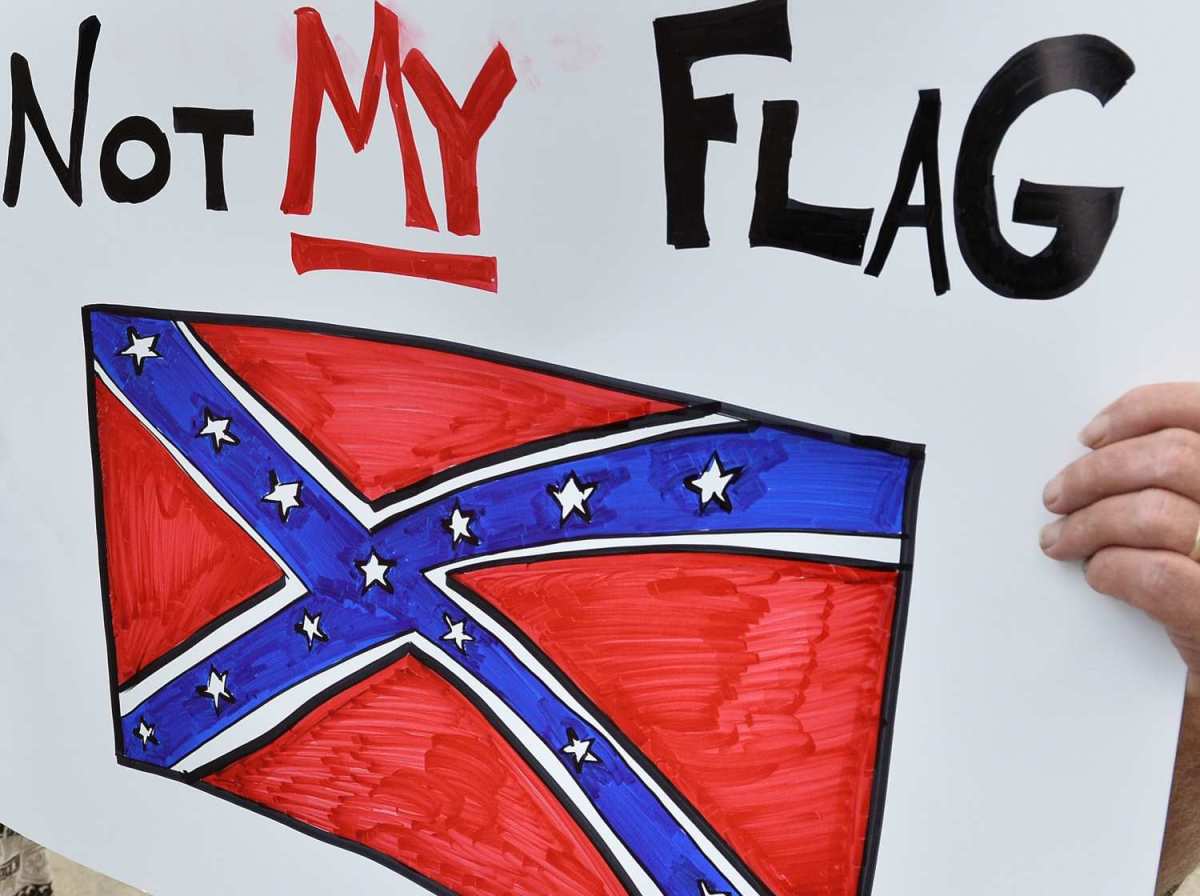 Saturday morning, activist Bree Newsome climbed a flagpole outside the South Carolina capitol building and took down the confederate flag capping a week of hot debate and fast movement towards removing the symbol of southern aggression from official state buildings.  Sadly, the flag is flying over the capital yet again, reminding us that symbols are only as powerful–or weak–as the acceptance of the ideologies they represent.  Removing the flags that celebrate America’s racist past will not eradicate the racist ideology that radicalized Dylan roof any more than removing a label from a can will vaporize what is inside.

Even as the President eulogizes the most recent victims of racism, the war rages on– arson, death and defense of the killer continue unchecked–and unexamined in the mainstream media.  Instead, the flag has taken center stage in the discussion of the Charleston Massacre.  A quick google trends search shows that the focus is squarely on the flag,  not the victims, nor the ideology that sparked the killing.

You’ll recall the flag furor kicked up when killer Dylan Roof displayed one on his website.  But while mainstream news has focused on the flag, the actual hate groups that pushed their racist filth on the internet, and whom Roof points to in his own radicalization continue to operate.  The presidential candidates who have taken money from Council of Conservative Citizens and other racist hate groups get an easy pass for their support of the flag’s removal without addressing their own past ties to hate activists.  There was no critical questioning of candidates ties to these group son the Sunday talk circuit, but plenty of flag not-waving.

Assuring us that there’s more than one hateful racist willing to perpetrate violence, six predominately black churches have burned in a string of arson stretching from Macon to Tallahassee.    Ongoing investigations will identify perpetrators where they can, but the echo of the 1960’s replete with racially motivated murders and overt attacks on the black community via the black church sound in ears still ringing with this week’s gun shots.  Mainstream media has all but ignored this string of violence in favor of the simply packaged story of the flag which looks to be moving toward a happy ending–audiences love a happy ending!

Two children lost their lives in the course of a police chase in Detroit–a chase that had been called off by commanders concerned about the danger to the public just moments before the deaths. Gunshots, rough rides and speeding vehicles all resulting in dead black bodies still happen daily, leaving the black community decimated emotionally, socially and politically.  The flags that flies over Ferguson, baltimore and Detroit  are all American, and the struggle for justice continues in all those cities.

Lets also not forget that Dylan Roof is not an old racist–he is a young racist, a millennial–from that generation that is supposed to mark the end of racism.  The flag may be a worn out symbol, one long past its prime.  Bu the perpetrator is merely 21–a man born in the heyday of hip Hop, and only 13 when Obama was elected–so squarely a member of new school racism, a racism proving just as deadly as old school.  Racism won’t just die with the rise of the millennials–education is still key in stopping the spread of racism to yet another American generation.

The flag needs to come down.  Removing this symbol from state grounds is important, yes, and long overdue.  But more important than the flag is the ideology that the flag represents–that was what radicalized terrorist Dylann Roof and emboldened others to burn down churches or commit one of hundreds of thousands of hate crimes that happen each year.

Attacking the overt labels of racism is important.  But we’re going to have to open our can of racism and deal with it if we are ever to reach a place free from racism and its violent devotees.   Celebrate the small victories in this week filled with funerals, but stay conscious, stay activated and never settle for taking down the flags of the fathers without addressing the sins of their sons.