Movies are more than just a tumble of images to fill our time; they are stories crafted from human ideas, fears and longing.  To look into a movie is to look into the human animal. These days the wildest animal around is the marmoset that’s running the country:

How to make sense of these times run by a tiny-handed (look he can barely hold a piece of apple!) comb-over-wearing primate hellbent on dismantling our democratic institutions? Let’s go to the movies! Much has been made of the connection between Trump and George Orwell’s 1984, so much so that the book has been flying off the shelves since the election. But what about other films featuring a world gone mad? These five films shed light on the devious nature of humans and the horror that we create when we let the worst of us be the first (family). 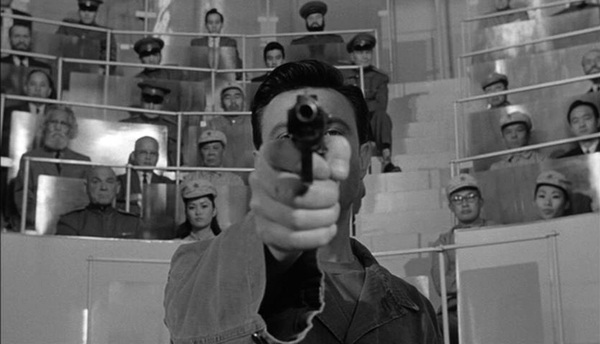 This 1962 thriller tells the story of a President controlled by a foreign administration–China in this case, or “Gyyna,” as Trump would say.  In the film, the Manchurian candidate is brainwashed after being captured in war.  In the Trump tale, the candidate was pee-washed in a Russian hotel room and paid off by Putin and his cronies.  With the film character, at least there was some hope of breaking through the brainwashing, but in our own sad story, we can only work to wake ourselves up from brainwashing.  Without a closer look at Trump’s taxes, it will be hard to find the financial connections purported to exist.  And if congress–Trump’s loyal lackey so far–get’s its way you’ll never get to see his taxes. Sidenote, the Manchurian candidate was easily controlled for a few reasons, one being he was not the cleverest guy in the room: looking at you, Don.

This is a tale of a world facing the ultimate decline–no more babies.  Before I make a joke about seeing Trump every day and a failing libido, let’s look deeper.  In the world of the movie, an undiagnosed infertility slowly takes hold till the world’s youngest person is 7 years old.  Trump’s plan to gut Planned Parenthood and restructure health care will leave women’s reproductive care underfunded and unmandated.  It’s a bad look to ignore the care of our human-making machines, especially in an age when infertility, just like in Children of Men, is on the rise for unknown reasons.  Also in the film, the government responds to the crisis by beefing up a police state at war with immigrants because of course when the country is crashing, a safe distraction is mass deportation…..insert side-eye here.

Speaking of treating whole groups of people horribly while the elite watch the world burn from their castle, Elysium takes the wall of Trump’s dream to astronomical proportions. Like our own real and fragile earth, in this film, the Earth can no longer support our fabulous way of life as is, so the elite say fuck y’all and build a space station where they hog all the good stuff, including life-saving medical care.  Elysium helps us see why health care has to be a human right if we truly hope to retain our humanity. Members of the Trump administration and their cronies, including associates of Peter Thiel, have no problem creating health interventions that will only be available to the wealthy. Meanwhile, Trump is busy trashing Obamacare with no viable replacement plan in sight. it seems like former representative Alan Grayson’s prediction is coming to pass.

If you don’t want to have to steal a space ship to get an MRI, you better keep an eye on the fast-moving health care bill and the fallout sure to follow.

The world is full of stupid people, controlled by corporations, dominated by an absurd media environment, where intelligence is attacked, and sensible responses to climate change are demonized.  That’s the movie.  Wait, no, that’s now.  Hmm, maybe this movie, as bizarre as it is, is too close to today to be impossible. Similar to Brave New World–and different from 1984–people in this dystopian future are controlled not with fear but with pleasure, full of food and mindless distractions until they are simply dumb downed fodder to be controlled by the corporatocracy.  So don’t let the promise of America’s glorious past, the GMO’s and the tweets lull you to sheep–stay woke.

Much has been made of Trump’s use of a psychological manipulation technique referred to as gaslighting, named for the 1944 Ingmar Bergman movie Gaslight.  The term refers to someone–in this case our marmoset-in-chief– trying to make you think that you are losing your mind a la I-never-said-that-even-though-you-have-a-tape-of-me-mocking-a-disabled-guy.  I went back and watched Gaslight, and found even more alarming connections: not only does Gregory the Gaslight villain try to make poor Paula (Bergman) think she’s losing it, he plans to scam her before they even fall in love.  It’s not casual manipulation, it’s a planned conspiracy to defraud and destroy a person he would pretend to love–feeling the burn yet Trump voters?  Like our own Cheif Cheeto, Greg the gaslighter is a con man, pretending to take on a role he is ill-suited to so he can swindle poor Paul out of her estate.  In the end, caught dead to rights and confronted by Paula, the con man simply cannot acknowledge the truth.  A con to the very end.  Let’s not wait 4 years to expose the con man in our own story.

So build a watchlist for this weekend–and keep you thinking hat on. We’ve seen this movie before, but this time we’ve got to rewrite the ending.