Imagine a world where there are 5 Parkland School shootings every day.  Imagine a world where there is a 9/11 every month. Now open your eyes to a country where 45,000 people a day die by suicide every year.  The suicide of two high profile celebrities–designer Kate Spade and bon vivant Anthony Bourdain–along with recent information released by the CDC have cast light on a subject that frequently goes unaddressed. Suicide–the 10 leading cause of death– claims more lives than school shootings and terrorist acts combined.

Kate Spade was a wildly successful fashion designer who built an empire on whimsy.  Healthy, beautiful, successful.  Anthony Bourdain was if nothing else a lover of life, taking us with him to connect with humanity over a bowl of food.  Again, wildly successful by any measures of our culture.  While we are familiar with the dark face of school shooters and struggling addicts dying from mental health issues, what does it say when those who live the lives we all fantasize about no longer want to live their lives?

The airwaves and interwebs are full of messages about what to do if you are in crisis, ways to combat depression, helplines that are lifelines, and exhortations to check on your friend.  This is important.  Destigmatizing mental health and providing adequate supports is awesome and helpful.

Lurking beneath this mountain of advice is the subtle blame that problems with mental health occur because individuals are not maintaining their own shit.  But how can one be mentally healthy in culture so permeated with hate and violence?  How can one rise above crisis when crisis is the soup of the day every day?  What role do our wildly unstable world and crumbling communities hold in this uptick in mental health issues?

Despite the myth of the American dream, beneath the sheen of instagram feeds are lives of anxiety, sadness and loneliness.  While we can acquire the goods that mark a good life–our systems are calibrated to help us achieve the material success–we work long hours, and often end up with stuff but no satisfaction. Exhausted at the end of the day we have little energy for putting in work to sustain the relationships that sustain us.  Our communities  seem to be drifting away from an orientation of connection–people lost in their own virtual worlds building bridges online instead of next door. Our heads are bent over screens instead of lovers. And all around us, chaos and a deconstructed democracy.

If we are a developed nation, what have we developed? Our country is permeated with sadness that sits just at the edge of our culture, a borderland on our beautiful dream, a place that some people journey to more than others, but a location available to everybody in this automated world of separation.  Mental health is a problem not just of individuals, but for the nation.  The National Suicide helpline and other organizations are important resources for people in crisis, but no call center can shift our damaged culture to create a space where more people feel safe and held and connected.

There is a deep malaise at the heart of America. you might say that the dream has become a nightmare, but it always has been.  This is a country literally built on a Native American burial ground. If you’ve even seen a horror movie, you know that this is not good. With high rates of suicide, massive amounts of anxiety, rampant addiction to pain killers and drowning even at the highest levels of success–maybe especially at the highest levels– the lie is exposed for all its terribleness. Sadness and loneliness and racism and sexism and capitalism and this unattainable life: we eat and are consumed.

David Foster Wallace compared suicide to jumping out of a burning building:

“The so-called ‘psychotically depressed’ person who tries to kill herself doesn’t do so out of quote ‘hopelessness’ or any abstract conviction that life’s assets and debits do not square. And surely not because death seems suddenly appealing. The person in whom Its invisible agony reaches a certain unendurable level will kill herself the same way a trapped person will eventually jump from the window of a burning high-rise. Make no mistake about people who leap from burning windows. Their terror of falling from a great height is still just as great as it would be for you or me standing speculatively at the same window just checking out the view; i.e. the fear of falling remains a constant. The variable here is the other terror, the fire’s flames: when the flames get close enough, falling to death becomes the slightly less terrible of two terrors. It’s not desiring the fall; it’s terror of the flames. And yet nobody down on the sidewalk, looking up and yelling ‘Don’t!’ and ‘Hang on!’, can understand the jump. Not really. You’d have to have personally been trapped and felt flames to really understand a terror way beyond falling.”

A quick trip through the headlines is enough to see that America for all it offers is a house on fire. To live in a home that is burning is bad for all the inhabitants, not just people with identified mental health issues.   The culture is not good for any of us.  Those that are struggling are an alarm– it’s past time to respond. 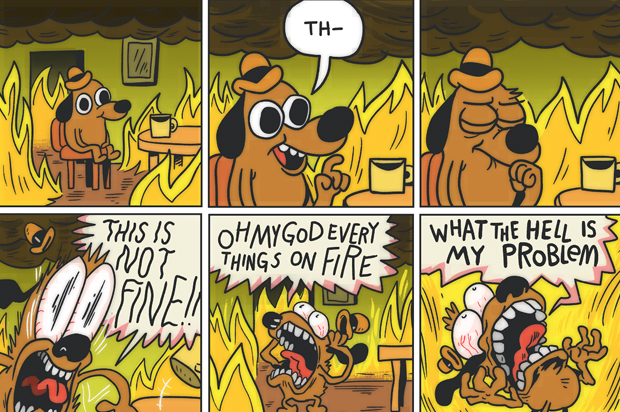 If suicide is people jumping from burning buildings, then we have to start to knock down the fire in order to create healthy environments to support healing.  We cannot always know or understand the inner lives of those we love, but we can be firefighters helping to battle the flames that threaten them. We need to care about each other.  We need to check on each other. We live here in this home together, and the roof, the roof is on fire.

While we wait to rebuild our culture is you or someone you know is struggling please know that there is help.  Check on all your friends.