We pose this question to Texas gubernatorial candidate Greg Allen who invited his pal Ted Nugent on stage this week at a campaign rally.  After appearing with Allen twice on Tuesday, a snowball of criticism  followed Nugent all week, calling him out for his most recent round of outrageous remarks about the president. 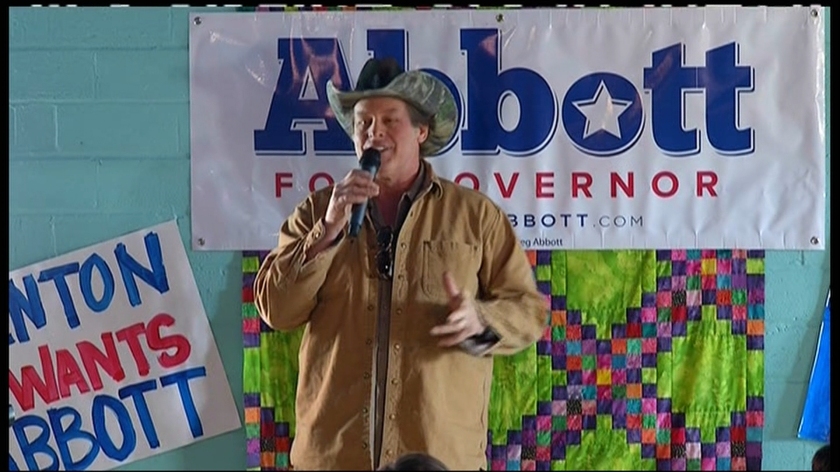 Nugent is no stranger to pissing people off.  He has been an outspoken spokesperson for gun rights as a board member for the NRA, a drum banger for the Grand Ole Party, and a staunch critic of Obama.  His incendiary comments have offended women, minorities, gun reform advocates, democrats, and animal lovers.

In fact, Nugent has been blowing up the airwaves since the 1980’s, appearing on talk shows, at rallies, and as a favorite guest on conservative radio.  His most recent comments, calling Obama a “subhuman mongrel” among other things in an interview with guns.com, were on the air for a full month before his appearance this week with Abbott, but when criticism required some response from Abbott, his aids countered that they were unaware of comments.   They added the fact that Nuget drew a crowd–in one instance tripling turn out when it was announced that Nugent would be appearing with Abbott–so perhaps adding Nugent to the rallies was just as calculated a move as it seems to be. 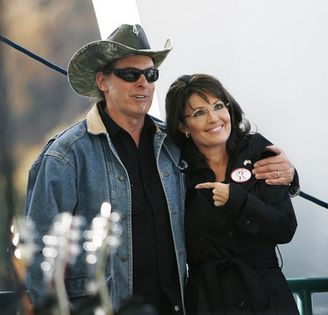 Nor is Abbott the first politician that Nugent has rolled out the rock and roll rant for.  In fact, there is a list of conservative politicians from Rick Perry to Tom Tancredo who have used Nugent to drum up support.  Even as popular-potential-2016-front-runners Ted Cruz and Rand Paul condemned Nugent’s comments this week, you don’t have to look too far back to find them sharing airwaves–and opinions–with Nugent.

The week ended with a  predictable round of tepid apologies from both Nugent and Abbott.  Let’s be clear:  calling Obama a subhuman mongrel is racist.  Nugent has been making these comments for long enough that his apology is meaningless.  It’s time for his political pals to think long and hard about standing next to Nugent and others who feel free to flaunt their racism on TV and radio.

The GOP has enough work to do engaging women and people of color.  Alienating those voters by locking arms with Nugent is an easy mistake to avoid.

In 2004 an idealistic young State Senator from Illinois assured us that we were not red states and blue sates, but the united stated of America.  It seems like since that time sates are getting redder and blue-er each year.  Whatever side of the isle you’re on, chances are you  are getting a healthy diet of haterade for your political opposites.

Its hard to evaluate the tone of political discourse and lay blame at anyones feet without looking at the media environment that feeds on and fires up a politically hostile climate.

Decades ago, news reporting relied on–wait for it–reporters and reporting.  Networks maintained large bureaus of news reporters: trained journalist paid to chase down and thoroughly vet news stories for nightly and morning news casts.  A steady erosion of actual journalists coupled with more and more hours of news shows to fill has resulted in a crisis in news.  The result?  shallow reporting, an increased reliance on pundits and “experts” and recycled, regurgitated stories taken from video press releases, company marketing material and tabloid stories.

Imagine you’re a news network exec and you have, oh say, 24 hours to fill without letting your foot off the pedal for viewers and driving them to change the channel.  What to do?  Fluff it up with newstainment–stories with exciting video or salacious stories, but low news value and useless information.  The clutter of viral videos and celeb worship make it more difficult to find out what matters, and encourages a gossip culture that extends beyond Justin Bieber into the political arena in search of the next scandal.

In a race for ratings, political coverage has become increasingly inflammatory, amounting at times to little more than a bad internet forum.   Outrageous factual misrepresentation is rampant with truth falling victim to sensational headlines.  Without fact checking, many viewers are left not only uninformed–but ill informed.  A recent study  found that regular viewers of Fox news are more likely to be less informed than people who do not watch the news at all.

So tonight’s State of the Union speech and the response from no less than 5 republican rebutters is sure to fill tomorrow’s airwaves with plenty of verbal vitriol and heated debate.  In the middle of it, we could really do with some seasoned, reasoned analysis of the very real problems our country faces.  We need facts, not talking points.  We need compassionate consideration of how to make America better for everyone not tweets going for red meat.

While you’re looking to see who’s tearing the country in half, just don’t look across the isle, take a careful look at the messengers of doom. Demand better news from your sources.  Write them letters, tweet their factual finessing, and call them out till we can get the news we need.