Man, we love our guns–and why shouldn’t we?  We have a right to love our guns up like new puppies.  Guns are everywhere in our culture, and since we want our kids to grow up with the full American experience, we love guns for kids.  We even love kids with guns!  Unless they’re black…then, no gun for you.

This week, 13-year-old Tyre King was shot and killed by police in Columbus, Ohio after police chased him following a report of an armed robbery.  Cornered in an alley, police report King leveled a pistol at them, prompting them to shoot him dead [though another boy arrested in the case contradicts the police story].  Turns out, the pistol was a replica BB gun, no more dangerous to the cops than an easy bake oven. 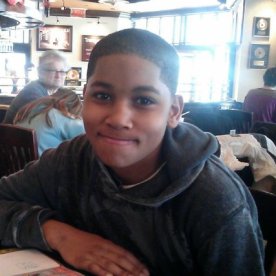 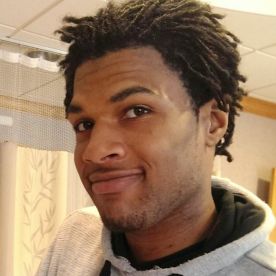 But toy guns have proven to be dangerous to toy-gun-toting black boys.  Tamir Rice was committing no crime when Chicago police rolled up on him and killed him in a matter of seconds, even though dispatch had passed on that the gun Rice head may not be real.  John Crawford didn’t even have a chance to pay for the toy gun that got him killed: police shot him in Dayton Ohio while he was still shopping in Wal-mart with the toy after a fellow shopper called 911.  The pattern was so disturbing that California Governor Jerry Brown pushed legislation to address such fatalities following the shooting of 13-year-old Andy Lopez.  The law aimed at manufacturers to halt the sale of toy guns unless the entire exterior was white of a color–but in a world of pink pistols(yes that’s a real Hello Kitty gun) and 3D printed guns this measure is likely to face future problems.

If a toy could be just cause for police to kill your child, then why have these toys at all? Outside city streets where cops are engaged in urban warfare is a whole world where kids with guns are good clean fun. According to an article in the Injury Prevention Journal, 3.2 million BB and pellet guns are sold in the US each year. BB guns are available for purchase without a licence or age restriction in most states. They may well show up at a Christmas party or wrapped in birthday finery in a home you care about.  In this parallel place of play, children pine for tons of guns.  Adults concern over supplying these toys revolves primarily around the danger of putting someone’s eye out, as famously captured by the movie A Christmas Story. 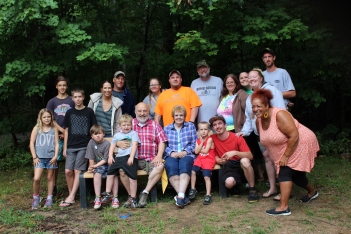 I had the great pleasure of spending some family time up in the lovely White Mountains of New Hampshire.  We had campfires and barbeques, went to the lake and of course the local attractions–Zeb’s Candy store and the army navy store.  As long as I can remember, from the mountains to the Cape, a trip the Army Navy store was always on my brother’s agenda.  Now with three kids of his own, they too can’t wait to get there.   This year they wanted their favorite Aunt to come too.

So off we went to the war store.  Now, I love me a good post-apocalyptic smack down series, but in real life, I’m a lover, not a fighter. I’m not naive to the ways of the world, but I also believe that nearly all problems can be solved nonviolently.  I was struck first that this is America–we glorify war, death, and violence even as we play cop to those worldwide who would use violence for their own ends.  Here at home, we have stores full of fake guns, then use those same fake guns to justify the death of young black and brown boys. Our heroes are all drenched in blood and stores like this are their preschools.  Let’s shop! 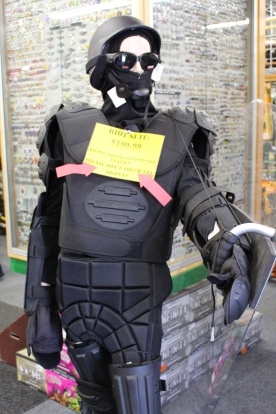 Does your baby coo for law and order?  How about this fabulous onesie, complete with a fake truncheon.  Don’t worry about outgrowing those  blues–you can just size up to the full toy kit so they can keep toddling at their local protests.  PS Get Parent of the Year for wearing the matching full body riot suit! 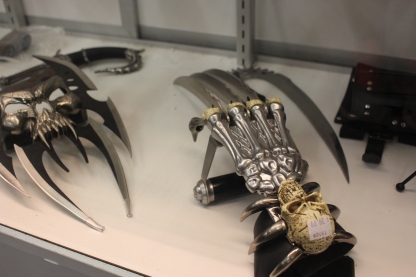 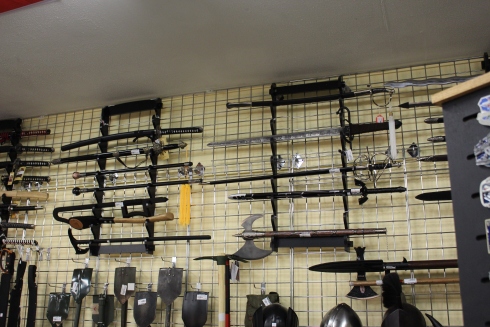 Game of Thrones play more your style?  Strap on these knuckle knives for a fun time.  I’m sure these sharpened brass knifeckles are super safe and not for violence of any kind.  The same goes for this wall of swords and battle axes.  Strictly decorative.  For people who want to decorate their home with lethal weapons.  It’s a look.

Ahh, the heart of the fun–the Airsoft BB gun wall.  Here is a shot of the long guns of fun–just a part of the 30-foot wall covered with toy guns, all looking completely real except for a small (removable for the resourceful) orange tip.   Not only do they look real, they are also real expensive$150 to $250+.  These are no five dollar cap gun–they look like the real deal and they shoot little plastic balls that don’t worry are no problem for the environment. 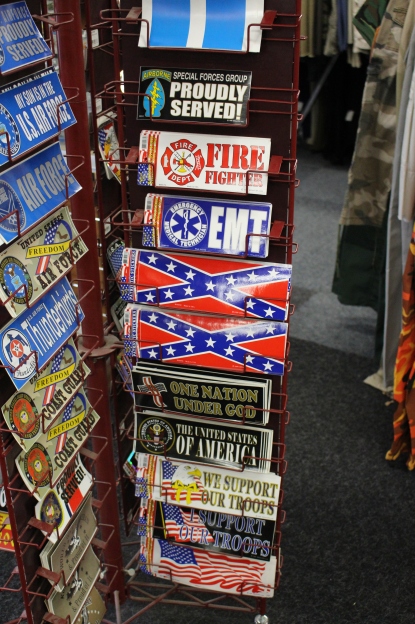 Truncheons and knifeckles and guns, oh my, what a toy store!  In case you have trouble reading the room, you can read a few books to help you have even more fun doing things like surviving a societal meltdown or building bombs with butane lighters.

So if the Army Navy store, which that day was doing brisk business full of sunburned vacationers out looking for a souvenir of summer family time, is considered a family friendly activity, full of games and toys to bring your family together, then why do young boys keep getting shot by the police for playing with these toys?

Why are guns and weapons good clean fun for my white nieces and nephews, but deadly play for my students of color? What could possibly be the difference between the patrons of the gun aisle and Tamir Rice, or John Crawford?

Play is the work of children, Piaget said.  Play is how they learn about the way the world works, what the limits are and what their place within it is.  Some children in our country are privileged to play with weapons and wield violence with no consequences.  Parents stand by proudly as children learn to shoot with no sense of the fear parents of color face preparing their boys to face a culture too often cocked and loaded. Some children get killed for playing the same games their white counterparts play with impunity. Some children think a toy gun will look like a toy to cops, thinking it will keep them safe from lethal trouble at least. They don’t realize that in their small black hand cops will see only a deadly weapon with a criminal attached.

If a child is a child, and a toy is a toy, then we are left with race-again-as the factor determining who lives and plays versus who dies at the hands of the state.  It’s time for common-sense gun legislation to extend to the guns we buy for kids:  it’s common sense to keep all our kids safe.