This week as we celebrated Martin Luther King Jr. Day Russian socialite and editor of Garage magazine Dasha Zhukova showed just how far we’ve come by perching atop a chair in the form of a black woman in bondage for the website Buro 24/7.  The image ricocheted around the world, followed closely by outrage, and a limp apology.  The chair is a reproduction of designer Allen Jones 1969’s version featuring a white woman—which, by the way, is bad no matter what race of woman is represented.

In the chatter that followed there were not a few people who excused the image on the grounds that the chair was a work of art.  It should be pointed out the artist that made it makes no claim that this is supposed to provoke race conscious thinking.  Anyways, the argument goes that part of the job of art is to provoke so no matter how offensive people may find it they have to give it a pass—an art pass.  It brings to mind another piece of provocative art by Swedish performance artist, called Ni**er Cake.

Let’s be clear–both examples of ‘art’ are racist as hell.  In both cases, those responding to criticism defend their use of racist imagery by throwing the art pass.  But here’s the problem with that argument:  we aren’t seeing these images in the controlled context of an art establishment.  The chair is not standing alone, but is to us part of the set for the cover of a magazine.  The cake is not confined to its gallery performance but slingshots around the world surrounded by the laughing minister of culture. 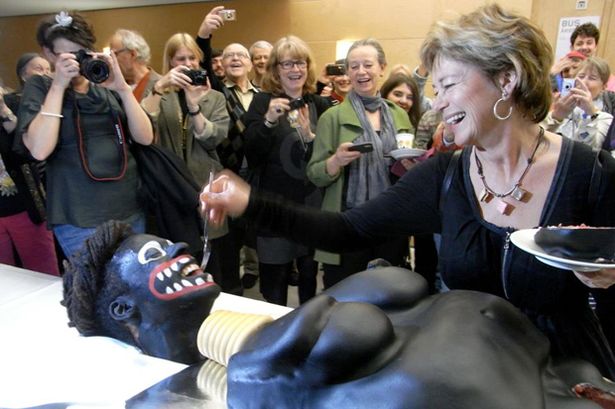 When we see these magazine covers or press conferences, these are media constructions, not objects of art, so they are governed by different rules of production and viewing.  Given the careers of those doing the apologizing, they were likely to have a very good idea of just how much attention such images would generate. These images, and the fire stores they create are no accident, but are carefully constructed to generate attention.  That’s what media is. 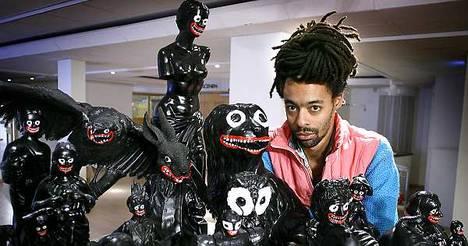 What we see that so rightly sparks outrage is a scene where people lounge and laugh as they engage with these racist objects.  There is no critique of power and prejudice, so only anger is provoked, not analysis. In both cases, it is the way these objects of art serve as set pieces for powerful white people that reinforces the old school racist imagery of white dominance over black bodies.

One more thing.  They say turn about is fair play.  Russian artist Alexander Kargaltsev released his own image (warning:NC-17 material)Alexander Kargaltsev in response to Buro 24/7.  By reversing roles, Kargaltsev say  he “reverses the visual injustice and offense perpetrated by that editorial and in a way restores the equality of genders, races, and sexual orientations.”  But to act out the same scene of degradation you object to only turns the wheel around again.  Offended?  You should be, but we have to rise above those we resent rather than continuing to play tit for tat.  As we see from the examples above, just because you create provocative images, that doesn’t mean that they will provoke change