Are you sick of protests interrupting your God-given right to watch men sustain traumatic brain injuries while you consume alcohol? Are you tired of listening to super-rich athletes using their power to ask for dumb shit like justice or equal rights for people of color?  Then I have some tips for you to put an end to these national anthem protests once and for all.

Demand a separation between politics and football–As an American, you have the right to remain completely ignorant of even the most basic functioning of the government of the country you love so much.  If you wanted to know anything about politics you’d be watching Meet the Press instead of NFL Sunday.  So demand a total separation between politics and sports. Now that might make it hard to build stadiums, or coordinate to make sure that the big business of football gets the support it needs from local and state government to function.  And the NFL would have to stop its lobbying activities.  That’s right, the NFL spends over a million dollars a year lobbying government officials, providing the kind of access that Colin Kaepernick doesn’t have. I’m sure the NFL would be happy to give up their lobbying activities and the power it gives them just so you can keep acting like you live in a world free of politics. 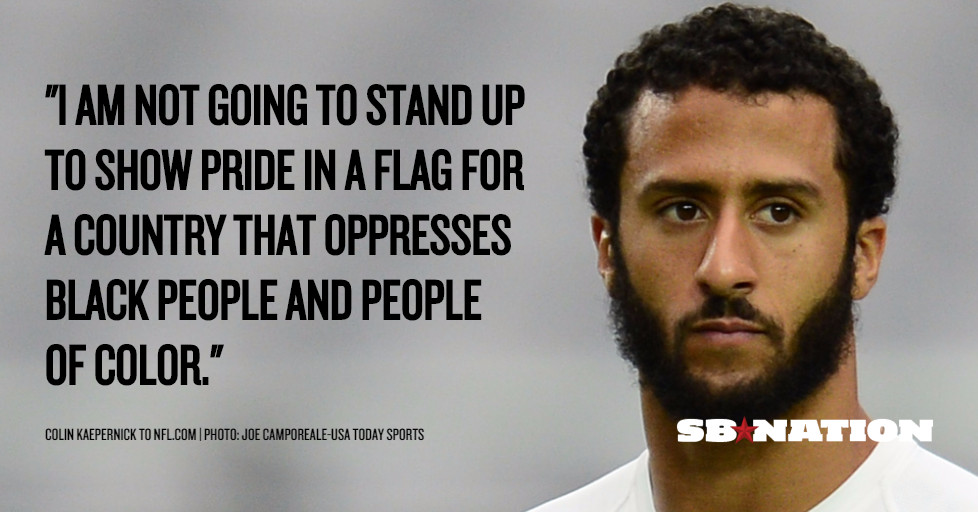 End extrajudicial police killing–I mean the protests aren’t about you, they’re about protesting the police killings of black people and inequality in our country.  Maybe if the government did something about the reasons that people protests instead of complaining about the protestors then there would be nothing to protest about and wa-la nothing standing between you and your much-anticipated hand on your heart moment!  The opposite of “no justice, no peace” is “justice, peace.” Make it happen!

Los Angeles has football fever and they have it BAD pic.twitter.com/nvQOg1kp6l

Join the football boycott–If you can’t stand to witness NFL players exercise their right to free speech, if you’re unwilling to support a fair justice system to end protests, if you just want to act like Muhammed Ali and Jackie Robinson don’t prove that politics and sports always go together then just stop watching football.  That’s right, boycott the NFL until free speech is outlawed and athletes muzzled.  You won’t be alone, either.  Months ago Black Lives Matter activists and community leaders called for a boycott. An unknown number of people answered the call to participate in the boycott over the blackballing of Colin Kaepernick. Early reports say attendance is down for both pre and regular season games even before Trump galvanized previously divided players and owners this week.

A final caution: while you’re trying to end the protests using these tips, you might just find yourself advocating for justice and an end to systemic racism.  You might find yourself creating a more peaceful world where we could all relax and enjoy a game instead of worrying about imminent nuclear war. You might just start to realize that fighting with the protestors is going to give you the real win, champ.

4 thoughts on “How to Stop The NFL Protests”