The Superbowl is  America’s highest secular holiday, a day where we celebrate the holy trinity of violence, fatty snacks, and great ads.  This year a 30-second spot during the Superbowl ran for a cool 5 mil.  Just like the teams on the field, advertisers have to go big or go home.  Making a play for the woke heart of America, Ram trucks gave us this spot, voiced over by none other than Martin Luther King, Jr himself. 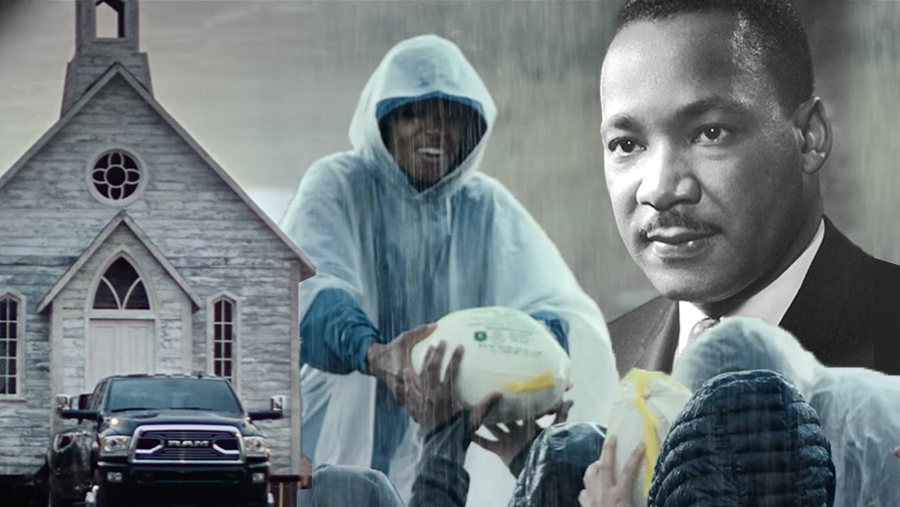 Yup, this ad went too far in pairing the eloquent and weighty words of a civil rights icon with a five thousand pound piece of environment-destroying metal with a lovely crew cab.   The pairing is as good as strawberry milk and shrimp: the MLK voiceover is too meaningful to stuff its authenticity into a pickup truck and the truck ad does nothing to add to our understanding of the great leader.  Lose-lose, just like the Patriots

The twitter machine is already chewing Dodge a new ass for the ad, and the King estate has confirmed that they had no part in lending the icon’s voice to the advertiser.  By tomorrow, the tepid apology or some version of a mea culpa will slap back the controversy and we’ll move on to the next.

Advertisers are riding a razor-thin line when they leverage the political and social upheaval in the zeitgeist for their ads.  Those who are in touch with their audience and talking with them instead of at them can really use the moment to show an authentic connection with their consumers.  This T Mobile ad that also ran during the Superbowl tried to connect with consumers who care about a number of movements:

Brands are best when they jump into movements to get important messages out without hoeing out the message for the sake of the brand.  In case you missed it Burger King did just that recently with their whopper neutrality ad:

You’ve got to get in the game if you want to win, so brands are bold to not shy away from what is happening in the world.  But to actually win, you have to do your homework.  Companies do themselves and the movements they purport to care about a disservice when they use social change as a costume they try on to sell soda or soap or trucks. Stripping the important events of our time and filling it with the same capitalist messages that have fed the inequality leading to this moment can leave audiences upset, brands tarnished and important social moments cheapened. Do better Ram, or stick with your Vikings.

Shea Moisture put out an ad this week called Hair Hate and then sat back and enjoyed their own Pepsi moment.  Here’s the ad below:

For a company that is built by, for and literally on black women, expanding their customer base by equating the hair challenges of naturals with the bad hair days of gingers and blondes wasn’t an overreach, it was a betrayal.   Shortly after Shea Moisture’s dragging began, so did the comparisons to the Pepsi ad.  Both seemed tone deaf, trivializing important aspect of black culture to sell product.  But I said it about Pepsi and now I’ll say it about Shea Moisture–they’re not tone deaf, they’re assholes; they’re not silly, they’re sell outs.

Shea Moisture’s built its brand on black women and their hard earned cash.  Even the label tells the homey story of the brand’s founder’s grandmother Sofi Tucker selling product in Sierra Leon.  Last year the brand shouted its allegiance to ethnic hair by proudly proclaiming it was going to desegregate the beauty isle–the implication being that Shea Moisture’s move to shelf space in the non-ethinc hair care section (called the regular hair section by most people) was about making hair care inclusive of black beauty, not leaving it behind. This ad clearly positions Shea Moisture as here for black women. Turns outs they were just getting ready to sell out in the rush to gentrify haircare and expand their own customer base and bottom line.

This is not a tone deaf company.  This is a company that has carefully–and with great success–made it big by catering to black women.  Looking back, it seems the brand, like an NBA player, wasn’t trying to rock with the sisters once it started making it big time (please don’t write me letters, my woke NBA brothers).  The move to the regular hair isle is now followed up with an ad that is shifting the brand to one that serves “regular hair”  The new ad is the shampoo equivalent of all hair matters, compete with Becky with the good hair. (Did they not listen to Lemonade?!)

Shea Moisture seeks to equate the hate of different kinds of hair without acknowledging that some hair hate comes with real consequences.  The hate towards natural hair in schools, business, and social situations is about more than hair, it is reinforcing white supremacy.  To act like hair hate is about hair and not hate means that Shea Moisture just doesn’t understand us anymore.  Maybe they never really loved us, they just loved our hair style.  Something tells me they’re about to find out if Becky with the good hair can love them like we did.