This weekend in an increasingly unsurprising surprise-move, Beyonce dropped a surprise single, “Formation” which was surprisingly woke and, unsurprisingly, Black twitter’s collective head exploded.  The video is a beautifully unapologetic apologia of black feminism, full of the trappings of contemporary blackness.  And it is dope.

The video is full enough of symbols to bang out a media criticism master’s thesis, but you don’t have all night and I’m not paying tuition so I’ll try to hit the highlights.

The video starts out with Beyonce perched atop a New Orleans police car in a flooded out Nola neighborhood–throughout the song she references her family pedigree so often a video viewer might be forgiven for thinking that she is claiming Nola as her own.  A few more establishing shots firmly establish that you are in the world of post Katrina New Orleans–and not the one where people celebrated the rebuilding of the city on the recent 10-year anniversary of the storm but the real New Orleans  where both the storm and the regentrified rebuilding continue to slay local residents.

The video pays homage to today’s black radical feminists: born in the wake of a storm, splattered with the blood shaken from cops hands, awake, agitating, unafraid.  Unlike Taylor Swift’s Bad Blood fantasy of women who slay, Beyonce shows us how real women slay in a world realer than anyone should want.  She shows us sisters with real black bodies moving with power and agency.  She shows us flashes of black culture unrecognizable to middle america–not the smiling coontastic network black, or the tear gassed protesters–but a black that exists where white America is not.  She showcases a range of black beauty that is existing not in opposition or response to, but out beyond the ideal of white beauty.  The press, the illuminuts, the haters, the cops all get zero fucks from the queen.

In the midst of times full of racial tension music has been both call to arms and therapist couch.  Questlove’s call to artists to respond to the political realities of black America have seen a Wu-Tang-crew-sized response with artists from Talib Kweli and Killer Mike, to J. Cole and, of course Kendrick Lamar all providing soundtrack to the revolution.  With so many women at the center of the movement for black lives, it seems only fitting that the ladies get their own black lives banger, special for the sisters.

Not only did Beyonce make this banging song, and this blazing video, but she also marched out onto the field during the Superbowl halftime show with a team of black dancers complete with raised gloved fists and afros tucked into beret a la black panthers.  Yup, sandwiched in between Coldplay and Bruno Mars was a little slice of go-ahead-and-lose-your-mind-white-supremacists. Fox news dragged Rudy Giuliani out storage so he could yell about inciting cop-hate, despite the fact that Beyonce didn’t once reference cop hating–or 9/11, so this is really none of Giuliani’s business.

Beyonce has not typically been one to tread a political path in her music, but these times are making us all more woke than ever.  She should be applauded for using her significant celebrity to highlight black women, especially in such a powerful and authentic way. As a mother to a beautiful baby-afro-wearing Blue, who does her own slaying in the video, Beyonce’s evolving black feminism is powerful modeling–of the cultural sense–for women both inside and outside of the black community.

The video to the song is rich with complex and layered symbolism.  We see Beyonce in places all cut from the new southern gothic–row houses and interiors cramped with golden southern sunlight and old bookcases, a porch fit for Madame Levaux’s coven of witches in New Orleans. Natural hair, and white lace, Gucci body suits and second line–Beyonce’s evocative imagery represents America’s troubled waters as a proving ground for black girl magic where she is high priestess here to share with you her prodigious power to make America love black women.  Like the culture of New Orleans itself, the story of black America she shows us is a layered petticoat of culture and of history.

So right about now, you should be feeling pretty good.  Maybe ready to buy the song–but you’ll need to download Tidal because the song is only available via Bey boo’s music streaming service, which last we heard was costing the couple money.  But it’s a great song!  Maybe you’re ready to go see the Queen herself.  Lucky for you, she-surprise!-announced a 40-city Formation stadium tour. Okay, no Tidal, no tickets, maybe just a little merch!  We got that too:

At Shop.Beyonce you can cop any of the latest must have accessories to the struggle–perhaps a bag that lets others know hot sauce is inside-cute!-or would you prefer a phone case that says that you that bitch when you cause all this conversation.  You can even get a sweat shirt that warns you will Twirl on Haters (wonder how long before Kenya Moore want her piece of the honeypie).  Hey, what if you want to be Bey? You can even go to Vogue for a lookbook of Beyonce’s Formation styles.

It all starts to seem like an awful lot of commodification for a protest song.  I mean no one’s rocking a Kendrick Lamar Aight trucker hat at martini-brunch. Is this video an authentic expression of Blackness or a carefully crafted product that commodifies the very images of resistance to sell back to the people its meant to uplift?

Last year, Beyonce and her Boo planned a summer tour together–the On the Run tour.  The tour materials, complete with Bey in a Vogue-ish ski mask harken back to the old Bonnie and Clyde that had worked so well for the pair in the past.  This time, tickets were a tough sell.  In the time of Black Lives Matter, thuggin’ it out in between parties at the Met didn’t seem to get the same street cred that it used to.  Nor could she go back in time to the Mrs. Carter tour, drenched in Eurocentric finery, and expect the very woke sisters of today to spend their hard earned cash on $100.00 tickets.  Embracing the political issues her young fan base faces worked well for her on songs like Pretty, so sprinkling some #blackgirlmagic on her new work was no risk.

If the song pays homage to Beys own blackness and love affair with her people, why not use the more poignant imagery on the merchadise?  Instead of having more realty tv twirlers, why not have any one of a number of powerful images from the video the shirts?  Black hat middle finger up?  First raised (in aGucci dress) on a cop car? Instead, the Formation money shot if you will is of her hanging out of a car window.  It seems to beg a who did it better between her and Kendrick Lamar–and the joker.

Berets, afros, gothic, Nola, second line, cop cars, graffiti, flood, black hoodies, hot sauce, big frieda, ghanian chiefs, hot pants, police lines, black boys, hair shops, parasols–it starts to feel a bit like Bey collected everything running through the dreams and nightmares of black women and arranged it–artfully, elegantly–to conjure a sisterhood…and to sell sweatshirts.  When she calls on us to fight, I’m not sure we agree on the end game.  I think the best revenge would be justice, or maybe a culture shift, even a hint of equity but all she wants to slay for is paper.  In fact, she strenuously defends her right to operate as a capitalist in free market economy:  you can do that, but I though we were on some black power shit?

And before you tell me what they donate, know that Beyonce has a reported net worth of $250 million dollars.  Peeling off bail money is laudable, but not considered to put them up among the ranks of active black philanthropists.  It is good to see the couple helping out more after the long standing beef with Harry Belafonte ended just this past fall.  The beef started when Belafonte called out Jay Z for his lack of activism.  Jay Z’s recent pledge of $1.5 million from Tidal is a step in the right direction, but again, not enough to make them stand out in a field of philanthropists with smaller net worths.

About this time in my love affair with this song, I start to feel little over-committed. Oaky, so it wasn’t really this oh-hey-look-a-song-I-made-! since the world of Formation is way to formed from song to video and tour and live performance and even merch. The song-as-product takes lots of planning, and this one seems like it was carefully planned to push the very buyable world of Formation. It makes me wonder if the perfectly timed Superbowl controversy was about black bodies or green backs. Nothing makes teens loves something more that Fox declaring it demonic.

Is it possible for something to be both amazing and problematic? Yeah, symbolic constructions are often like that.  Best believe this song and its video have earned the title instant classic.  But the hyper commodification of black power imagery is selling a lot of product–something we are right to be watchful of.  In these times we have little more than our own sense of self–we’ve got to guard that–even against Mr. and Mrs. Carter. 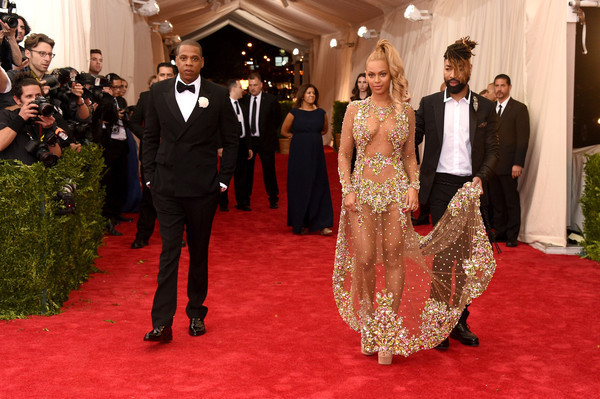 But its not too late, Bey, to be that black Bill Gates in the making–remember he quit the business to devote himself fully to charitable work and social change.  Think of how amazing you’ll look slaying systemic racism in that Gucci.  We’re here waiting for you, in formation.