The Oscars are here: another year, another chance at a handful of firsts for diversity in the 92-year-old institution.  Parasite could be the first film to win both Best Picture and Best Foreign Film; Cynthia Erivo, star of Harriet, could be the youngest person to ever win an EGOT; and in a double first the first black president and forever-in-our-hearts-President Obama may be the first President to win an Oscar for the documentary American Factory.

It seems odd that we should still be having firsts in an institution that started in the last century’s roaring ’20’s. The Oscars have been dragged for years now over their lack of diversity.  #Oscarssowhite has become an annual trending tag, highlighting the continued need for diversity in the Academy and in Hollywood writ large. The hackneyed excuses that there aren’t enough actors of color, movies featuring stories focused on people of color, or female directors can no longer deflect criticism: the stories and the talent are in evidence everywhere.

The Academy has put a number of programs in place to increase diversity in nominees and awardees.  Since the creation of #OscarsSoWhite by April Reign in 2015, the Academy has invited hundreds of new members across underrepresented groups of race, gender and nationality into the voting body. Even so, the Academy membership is still overwhelmingly made up of white males.  Only 31% of Academy members are women and 16% minorities.

Efforts to diversify the voting body notwithstanding, the whiteness of Oscar has not changed much in 92 years.  Despite a wealth of amazing work by women and creators of color, the winners’ circle has remained largely the same—white males acting in stories that center white narratives. Last year’s top picture prize went to Green Book, a white savior movie a-la The Help with less pie, over cultural touchstone Black Panther or quietly powerful Roma.

We can’t go back to a time when diversity can totally be ignored by movie studios—people of color and women make up a significant portion of the ticket-buying public—but movies can try to transport us back to manifest American’s mythical destiny, letting the less-than-woke rest a little longer in Lala land. This year’s most likely winners represent an America that might be comfortable in a red hat, stories of white men from the twentieth century where they are untouched by today’s cultural complexity. These stories evoke nostalgia for a time when the voices of the oppressed and othered didn’t get heard, a dog-whistle to people who long to silence today’s resistance.

The Oscars are not the only awards show with diversity issues. This award season there has been plenty of criticism all around: the Golden Globes snubbed Ava DuVernay’s powerful When They See Us, and women directors have been shut out of Best Director awards. Even the Joker had to call out the unbearable whiteness of the awards. Joaquin Phoenix, widely hailed for his role as a white man in white face acting out his white rage with no accountability had to pause to ask for less racism in Hollywood during his BAFTA acceptance speech.

It’s tempting to just write off award shows altogether—who cares what trophies the rich and famous give to each other?  Movies, remember, are both art and investment vehicle. Studios spend big to promote Oscar-nominated movies in the hopes of earning box office revenue and clout for future productions. Prestigious awards can have an impact on the kind of stories we are likely to see in the future. Continuing to award only stories that center white men exercising their privilege and power works against the efforts to create robust diverse representation.

In order to really move the needle in diversity in media, we need to do more than crack open the door for diverse voices.  We need to uplift stories that weave a new world—a place where black people win on and off the screen. Here’s looking forward to the first #OscarsSoDiverseForReal.

Just when I learned to order my venti-hot-soy-chai-two-extra-pumps-no-foam-no-water in a single breath, Starbucks joins the list of companies I have to boycott because racism. Bad enough that my Sundays are spent football free, now every morning will be an exercise in fuming on all black people are left out of in America–peace, justice, Starbucks single stall bathrooms and lemon loaf.  Unlike the NFL, Starbucks is already hard at work to win back my daily $7.65.

Starbuck CEO announced in an earnest apology video that they will be closing stores on the afternoon of May 29th to train all of the employees in the whole company with a mandatory “implicit bias and conscious inclusion training”  He describes below that this is the first step in trying to live out their company values.  Ahh, back to chai heaven, right?

Wrong.  While I applaud the company’s willingness to respond and respond big with a company-wide shutdown, I wonder if this reactionary-proactive-action will have the desired result.  As someone that frequently engages in racial dialogues and trainings, I have lots of questions.  The massive scale of this concurrent training sounds grand, but I wonder about how you could effect such a training with consistent results at 8,000 stores in different geographic areas and different local contexts, with thousands of different trainers of varying experience and tens of thousands of people with varying lived experiences and beliefs.  (I picture an army of facilitators armed with lattes and flip charts deployed en mass–but from where? ) And what will they learn?  And if they discover they have implicit bias, will this trigger any work on company policies and practices?  After the training, how will we know if they’ll arrest us if we go there if we don’t go there anymore? 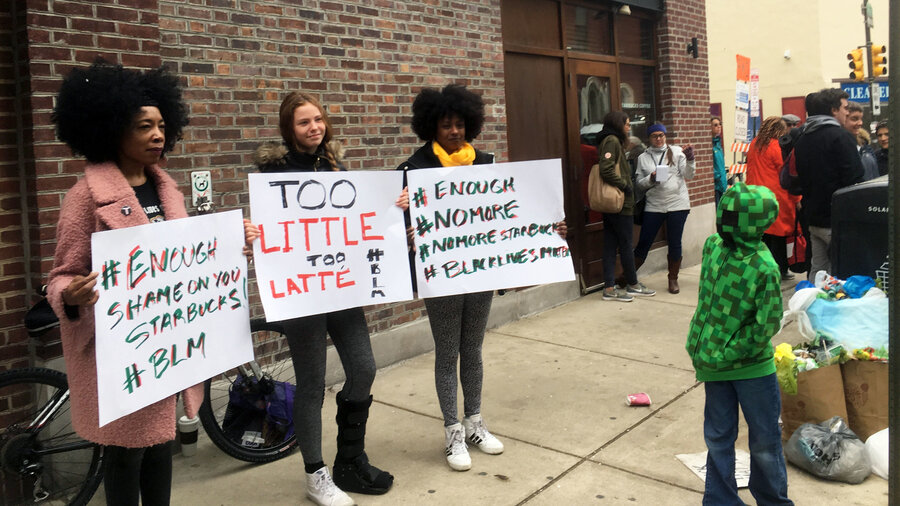 My other question is aimed not at Starbucks alone:  is implicit bias the tool we need to help private companies address racism in their practices and customer interaction?  There can be no doubt that implicit bias training is all the rage these days–and it is an important and eye-opening first step for people unaware that humans carry biases.  When discussing race, it can be a helpful entry point for conversations–we all carry around ideas that we are not in control of, some of which relate to race and dominant cultural ideas about race.  We all have implicit biases– it’s important to know that and think about where we each may have an inclination to shut down or react strongly.

But the thing about implicit bias is that you are not in control of it–it is operating unconsciously, ticking away in your brain with no help from you.    Racism, however, is not something lurking beneath our id waiting to stir our sleepwalking self to acts of discrimination.  Racism is systemic, embedded in principles, practices, policies, and actions of institutions and the individuals who work in them.  People not only have implicit bias BUT ALSO act out on subjective ideas and beliefs about race.  Learned behaviors and attitudes about race are conscious parts of how people interact with each other, how they make decisions–conscious decisions–about how and when to enforce policies.  Acknowledging and taking responsibility for the ways that we reproduce racism in our own environments takes more agency and deeper engagement than acknowledging implicit bias alone.

Implicit bias is one of the few places where we can measure the trace of racism or sexism in the brain. Since implicit bias is data-driven and testable, it appears to be a “more scientific” approach to talking about racism than examining history or acknowledging the political significance of race.  But race is a social construct, and years of social science, political science, and historical research has afforded us deeper, more nuanced and more complete ways of talking about and addressing race.  While implicit bias training is a nice start for an afternoon, it lacks the depth needed to address racism in all its complexity.  Well begun is not half done in this case.  If we really want to go there, Starbucks and our country would be well served to look at the many conscious ways discriminitory practices are enforced, reconcile them with their company values and build a new more equitable relationship with the communities they serve.

When they do, I’ll take a venti soy chai with two extra pumps, no foam, no water, no racism.