When Kanye mounted the stage and took the mic from a shell-shocked Taylor Swift, a nation wept for her embarrassment and heartbreak.

Five years after Kanye questioned her winning over Queen B, Swift has solidified her name as Pop music’s Queen Dujour, ruling in the kingdom of pop with her princes from One Direction.  No bows down to Beyonce, no calls of hip hop hooray.  Even Pharrell’s ubiquitous “Happy” lost out to Katy Perry.

Given the list of the AMA’s winners yesterday, I wonder if pop music will continue its trend of decreasing diversity.  Last years biggest records sported a roster of mostly white performers.  Makes sense in a country that is majority white, right?  Well , given the history of music and the massive popularity of hip Hop and rap, the last decade  provided a more diverse cast of artists than recent years.  America itself is increasingly diverse, with nearly 30% of Americans belonging to a minority group.  When it comes to the young ‘uns–kids under 1–over half of them are minorities.  So the future of music looks diverse but…..

If this year’s AMA’s are any indication, this years top selling songsters this year may again check the same box off on the census.  Is the audience shifting, are results skewed by sophomore social media voters, or are the times a-changing? Weigh in below!

I was just minding my own business, enjoying some animal crackers when Stop and Shop hit me with this #tbt Nabisco ad taped to my crackers. 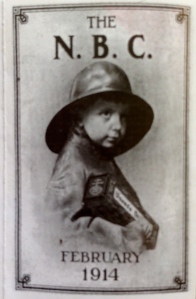 That’s one creepy kid….do you want a cracker now?…is it the Pharrell hat?

Pharrell Williams “Happy” is the modern day ode to joy.  What happens when joy takes shape in Benin, West Africa?  It looks just like this viral video by Stéphane Brabant.  Further proof that there are happy people of every race in every place.

Well, the 56th annual Grammy awards are all done but the hangover.  In case you couldn’t stay up to catch them all, you may have missed a few awkward moments, some aging rockers and a truly touching wedding a-la Moonies.  You also may have missed these award-worthy standouts.  Ladies and gentlemen, the first ever smntks celebration of the Grammys–the Sammy’s!

The Hand That Rocks The Cradle Award

This year’s Hand That rocks the Cradle award goes to Pharrell Williams.   He hit the stage so much you might have thought he was escorting the guests…but no, he is stirring the pot of pop music behind such hits as “Get Lucky” and  “Blurred Lines” as well as his own “Happy”.

Thong of The Year

Putting to rest the argument about Beyonce being the face of black feminism, Queen B tore open the Grammys with her Drunk in Love Duet with hubby Jay Z.  She may not have taken song of the year, but this shot shows she may in fact break all laws of physics…or she has some spanxs like you wouldn’t believe.

Steven Tyler belts out a few bars of Smokey Robinson’s   You Really Got a Hold On Me as Smokey looks on.  Maybe it’s that smooth skin you could bounce a quarter off, but Smokey looks less than impressed.

Sure she’s a winner…but not last night for album of the year.  Taylor Swift had to check herself to not jump up when Daft Punk scooped up for best Album.  She would have gotten extra points for actually storming the stage and telling Daft punk that she deserved it.

Beyonce takes a second Sammy for going yaki-free and sporting what looks to be her own natural hair.  Now she had a pixie not too long ago as my buddy T pointed out, but until we know otherwise we thank the Queen for showing up with hair that looked real and elegant

Hat of the Night

Hands down this award goes to Pharrell for his signature 2013 Vivian Westwood Hat.  Madonna tried to make a play for this award at the end of the night, but to no avail.  You can hate Pharrell’s hat–or make a funny meme out of it–but you cannot deny that it took a lot of confidence to rock that bad boy all night.

Did we miss an award?  Hit the comments with your best Sammy.